Author Steve Snyder will be at the Arizona Wing of the Commemorative Air Force Aviation Museum this Saturday, March 7th, 2015 from 10:00 AM to 4:00 PM to sign copies of his book “Shot Down”. Remember, admission to our museum is discounted this day, we have extended our hours, and Falcon Field Airport (where we are located) in Mesa, AZ will be having their Open House! 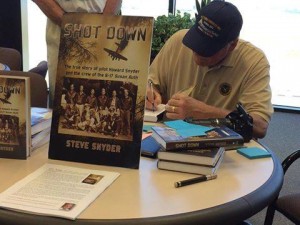 An UCLA graduate and retiree from VSP Vision Insurance, Mr. Snyder belongs to numerous World War II associations. Steve serves on the Board of Directors for the 306th Bomb Group Association. A California native and a part-time resident in Sedona, Arizona, he has made it his mission to learn everything possible about the WWII experiences of his father, pilot Howard Snyder and his of the B-17 named, “Susan Ruth”.

Steve’s father, Howard Snyder, was a B-17 pilot stationed in England during WWII. On 8th February, 1944, his plane was shot down over the French/Belgium border after a mission to bomb Frankfurt, Germany. “Shot Down” tells the true story of events leading up to and after that harrowing day. The book is unique in the varied details and amazing story of each of the ten men aircrew. In particular, is pilot Howard Snyder’s evasion of capture for seven months.