‘Shot Down’ a harrowing WWII story 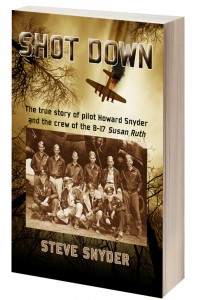 “Because Howard Snyder was the last man to bail out of the plane, he came down about 10 miles further west than the rest of the crew,” Steve Snyder explains in “Fate of the Crew,” the 28th chapter of “Shot Down: The True Story of Pilot Howard Snyder and the Crew of the B-17 Susan Ruth,” his meticulously-researched account of his father’s experience during World War II.

“When he landed in Macquenoise, Belgium, at around 1:30 in the afternoon, his parachute snagged in some trees, leaving him hanging some 20 feet above the ground,” he continues. “Two young Belgian farmers, Raymond Durvin and Henri Fraikin, saw Snyder coming down and ran to the area. Seeing him dangling from the trees, they went to get a ladder and rope to rescue him. When they came back, they threw him the rope so he could tie it around his waist, and then ,,,,