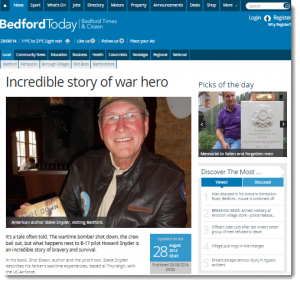 It’s a tale often told. The wartime bomber shot down, the crew bailout, but what happens next to B-17 pilot Howard Snyder is an incredible story of bravery and survival.

In his book, Shot Down, author and the pilot’s son, Steve Snyder describes his father’s wartime experiences, based at Thurleigh, with the US Airforce.

Wearing a jacket that bears his father’s name tag and uniform badges from 70 years ago, Steve said his book was inspired by the letters his father wrote from Bedfordshire, which contain ‘a wealth of information’ about life during the Second World War.