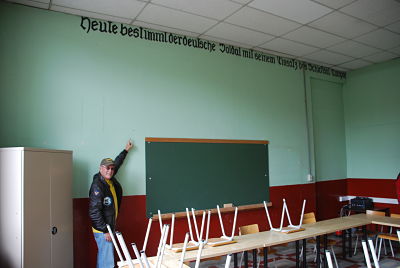 The following is an email from 90-year-old Hans Berger that he sent to me after meeting with my youngest son, Clayton, in Munich a couple of weeks ago.

Thank you again for a copy of your book and your dedication to it.

I really enjoyed Clayton’s short visit to Munich, pity you did not have an opportunity to join us. We had a few very delightful hours together, unfortunately, I had to leave in the late afternoon because I was due for a dental operation early the following morning in Augsburg, about 40 miles away from Munich.

I have not yet had the time to have a closer look at your very interesting book on your father’s not so very pleasant “trip” to wartime Germany back in 1944, but I will most certainly read it from cover to cover in the very near future. Interesting to gain an insight into the feelings and experiences of someone from the “other side of the road”.

Almost incredible that after such a long time of 70 (!) years you should have found the guy (and found him still alive!!) who shot down the “Susan Ruth”. I was shot down myself three times (bailed out twice and crash-landed one, also wounded), so I know a little bit of what your father is talking about …

As far as the fotos are concerned, what the writing on the wall says is “Today the German soldier with his active engagement determines the fate of Europe.”Thank heavens that history took a different turn!

Warm greetings from Munich to you and your family, Hans

The photos Hans refers to are ones I took in the Chimay School House (Ecole Communale de Chimay) which had been taken over by the Gestapo during the Nazi occupation of Belgium. It was where the betrayed and captured eight U.S. airmen (including B-17 Susan Ruth crew members George Eike, Robet Bennninger, and John Pindroch) were taken for interrogation. One of the classrooms had a German inscription on the wall, and I asked Hans to translate it for me. 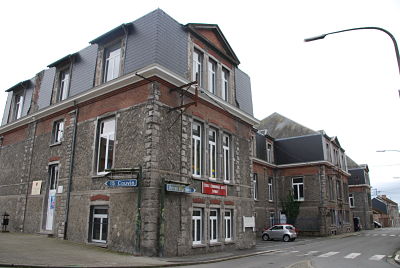