Mighty Eighth Museum Dedicates Its B-17 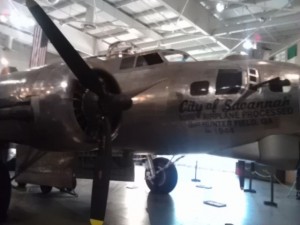 B-17 City of Savannah

Hundreds of spectators, including World War II veterans, current military service members, and museum volunteers, crammed into The Mighty Eighth Museum on January 28 as the museum dedicated the B-17 Flying Fortress bomber that’s been dubbed the City of Savannah.

Donated by the Smithsonian’s National Air and Space Museum in January 2009, the aircraft arrived at the Museum in assorted pieces. It was the Museum’s goal to restore the bomber so that it would become the finest static display of any B-17 in the world. Finally restored to its full World War II combat configuration (complete with three working gun turrets), the B-17 City of Savannah now sits at the center of the institution’s Combat Gallery