71 Years Ago During World War II

Below is a translation from an article that appeared in the Belgium newspaper,  l’avenir

Thanks to the crew of the B 17

Sunday, the civil authorities and made military respect to the crew of the B 17 fortress that crashed in Macquenoise.

The day of February 8, 1944, has been that of a tragedy for the crew of the American B-17 Fortress Susan Ruth. It crashed at a place called The Distillery Macquenoise, returning from a bombing operation on Frankfurt, pursued by the German aerial hunting. The memory of this tragedy is still alive, and the crew of memory, a monument was erected in 1989. Each year a memorial service is held at the memorial, at the initiative of the municipal administration and association for Momignies Lest We Forget (former Belgian-American Foundation dear to the late Paul Delahaye).

The day of remembrance began with a church service in the church of Macquenoise, whose choir was occupied by the delegations of the Franco-Belgian and American patriotic associations with their flags. At the end of the Mass, a tribute to veterans poem was read by children of the entity. 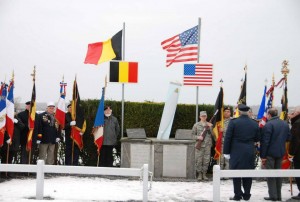 Ceremonies at B-17 Susan Ruth Memorial at Macquenoise, Belgium 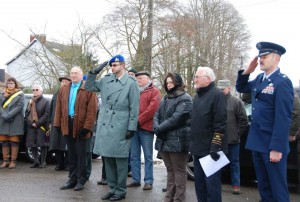 After this brief process of memory, all went to a place called The Distillery for the memorial service. In a snowy landscape, swept by an icy wind, participants listened to several interventions circumstance before the deposition of flowers and national anthems. The mayor of Momignies Albert Depret stressed the importance of working memory required and the manifestation of gratitude and vis-à-vis our liberators recognition. 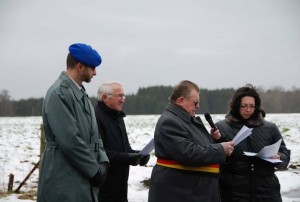 Lieutenant Colonel Kuester, R 424 Squadron Base, thanked the civil authorities and the association of Momignies memory Duty of loyalty to the memory of heroes. As for Séverine Delahaye, Member of the Association of Lest We Forget, she thanked the delegations who have at heart to closely associate with the patriotic approach.