SHOT DOWN Receives INDIEFAB Book of the Year Award 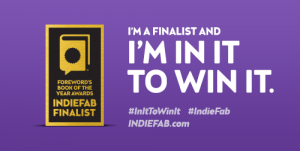 SHOT DOWN: The true story of pilot Howard Snyder and the crew of the B-17 Susan Ruth has been selected as a War & Military (adult Nonfiction) finalist in Foreword Reviews’ prestigious 2014 INDIEFAB Book of the Year Awards!

Each year, Foreword Reviews shines a light on a select group of independent (indie) publishers, university presses, and self-published authors whose work stands out from the crowd.

In the next three months, a panel of more than 100 volunteer librarians and booksellers will determine the winners in 63 categories based on their experience with readers and patrons.

“After 17 years, our awards program has become synonymous with quality because our editors set such a high bar on the finalist round, which makes it especially tough for the judges who select the winners,” said Victoria Sutherland, publisher of Foreword Reviews. “In every genre, our judges will find an interesting, high-quality selection of books culled from this year’s entries.”

Foreword Reviews will celebrate the winners during a program at the American Library Association Annual Conference in San Francisco on Friday, June 26 at 6 p.m. at the Pop Top Stage in the exhibit hall. The Editor’s Choice Prize for Fiction, Nonfiction, and Foreword Reviews’ 2014 INDIEFAB Publisher of the Year Award will also be announced during the presentation.

In a competition with over 1500 other entrants, it’s pretty great to have made it this far.