Shot Down: The True Story of Pilot Howard Snyder and the Crew of the B-17 Susan Ruth is a military history book written by Steve Snyder, Howard’s son. The author played at being soldiers as a boy, but did not really understand the role his father played in WWII until he was older. His father kept in touch with many of the survivors of his crew and with the people in Belgium who helped him after his plane was shot down. In 1994, Steve accompanied his parents to the 50th Anniversary Celebration of the Belgium Liberation. Howard Snyder and his wife both died in 2007, and Steve began looking at the war memorabilia they had collected, including Howard’s hand-written journals, letters and pictures. He continued his research into the Eighth Air Force and its role in the wartime effort. 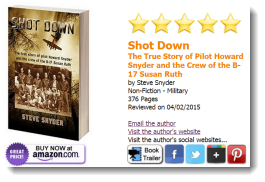 Steve Snyder’s military history book, Shot Down, reads like a novel, yet it isn’t. The names and faces are all real, but their stories are presented in such a compelling manner that this thorough and painstakingly researched effort reads smoothly and fluently as Snyder and his father’s journals bring the past to life. I was fascinated as I … (continued on the Reader’s Favorite website)